Our thoughts, greatest news and professional tips and tricks! 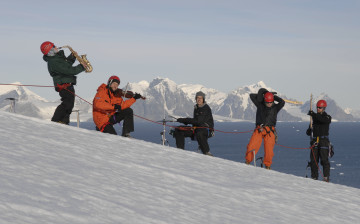 One of the most exciting things about Cambridge Saxophone is getting to know my students. At the moment I have Research Professors, Brain Surgeons, CEO’s, fellow Professional Musicians and even a South Pole Research Scientist!

Pictured is my student Ali practicing her sax in Antartica. As a Cambridge Saxophone student you are part of a group that has members on all seven continents!

If you want to find out more about Cambridge Saxophone, I would love to hear from you.  Simply click this link to drop me an email, give me a call on 01223 8360997 or start one of our courses today! 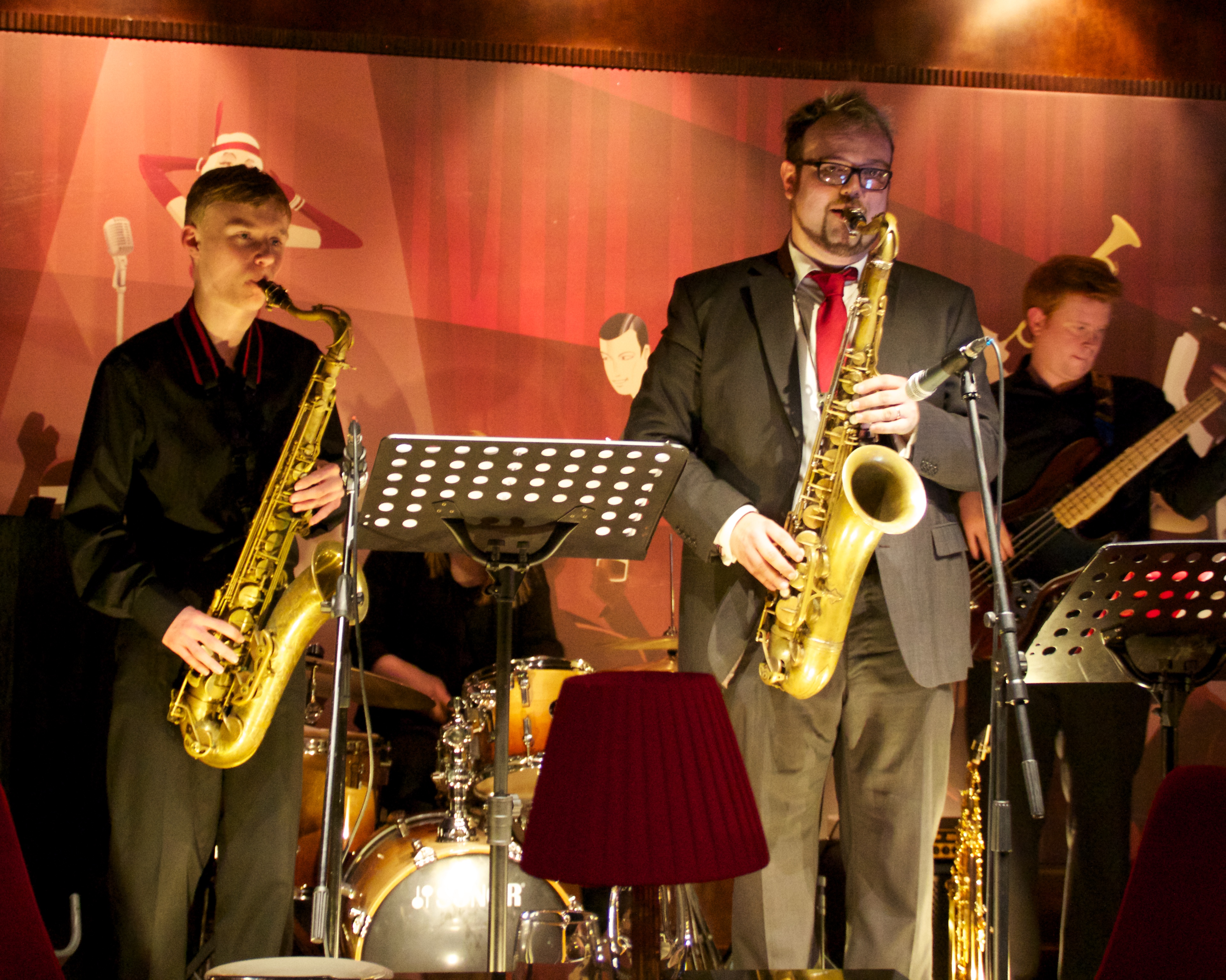 Taking lessons with a new teacher is always a big call.

How will they inspire you?

How will you get better?

Will you get on together?

Can they explain things clearly?

Because of my VERY strong track record (click here to watch what some of my current students think) I believe that here at Cambridge Saxophone I can do all the above, and more.

I’m the current saxophone teacher for Cambridge University; I also have students of all ages and abilities. I’m willing to teach anyone provided they have the desire to learn more, are happy to work and have a passion for music.

I want to offer you FOUR free saxophone lessons – no obligation, no catch, no spam. You’ll get an occasional update about new lessons but I will NEVER pass your email on to anyone else.

Simply get in touch and I’ll email the lessons out to you today.

If you have any further questions, please just contact me. 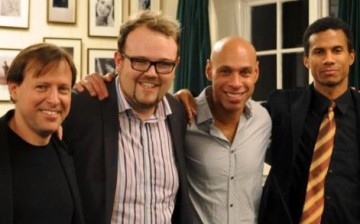 Quite possibly the greatest gig ever for a saxophone player – four of the modern day greats all playing together.

I was delighted to hear Chris Potter, Joshua Redman, Mark Turner and Chris Cheek performing at the Wigmore Hall, London, as part of the Axis Saxophone Quartet. They all played tenor at some point (check out this video from their gig in Moscow playing ‘Tenor Madness’, just as they did in London), but then they also divided duties across the three other main saxophones. Chris Potter and Josh played soprano and alto (Potter is a beast on the alto, even though he doesn’t really play it much any more), Mark stayed mostly on tenor, whilst Chris Cheek kept the low end going on baritone.

Chris Potter told me his alto mouthpiece was an exact copy of Charlie Parker’s Brilhart and had been moulded from the original, now in the possession of Parker’s daughter.

I was thrilled to meet all of the guys backstage afterwards courtesy of Yanagisawa UK, who lent Chris Potter and Joshua a 991 alto and soprano (watch my reviews of these horns here).

Some of their words of wisdom that I wanted to pass on to you:

It was a great thrill to hear all these guys in one place, in a fully acoustic setting. I had a long chat with Josh about bringing the event to Cambridge at some point in 2015/16 – let’s hope we can. 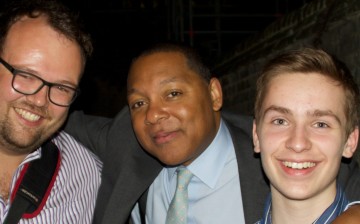 On Saturday, 21st June I was delighted that Wynton Marsalis brought the Lincoln Center Jazz Orchestra to the Cambridge Corn Exchange. It was a particularly special date for me as it was exactly fifteen years ago to the day since I performed on the same stage with a Blues Brothers band.

I had been in touch with LCJO saxophone players Sherman Irby and Victor Goines to arrange a backstage meeting, but they both escaped to The Eagle for some fish’n’chips! I met up with them later on, but it was a real thrill to introduce some of my students – in particular 14-year-old Rob Burton, who, maybe one day, will be playing with LCJO – to … Wynton Marsalis.

Some of the great pearls of wisdom that Wynton shared with us are outlined below.

Don’t just learn the notes, learn why those notes were played.

Many of you may know that Wynton is quite a jazz conservative. His excellent book Moving to a Higher Ground is a must-read for any student of music, jazz fan or not. We’re going to read his book and have a Google hangout on it over the summer. But he surprised me a great deal by encouraging Rob (and all of us) to learn the music of Ornette Coleman:

The avant-garde is what youngsters should learn. They need to appreciate the freedom that is found in the music of Ornette Coleman.

I later met up with Sherman Irby, Victor Goines and other members of the saxophone section for a few beers. I’ll say more about this over the next few weeks, but these are some of the key points they wanted to share:

It was such a great thrill to have these guys in Cambridge. I’m in touch with a few interested parties about getting a Cambridge International Jazz Festival and I’d love to welcome Wynton and the Jazz at the Lincoln Center Orchestra back to this town.

Here is our 2021 Student Christmas Project from the ‘A Jazzy Christmas’ book from Wise Music. Thank you to all of you who got involved with this and sent in a recording. The Christmas project is a great way to gauge your progress from year to year and it thrills me each year when individual students can offer me more ‘bars’ and some can even get through the whole solo, when just a few years ago the melody would have been a challenge. 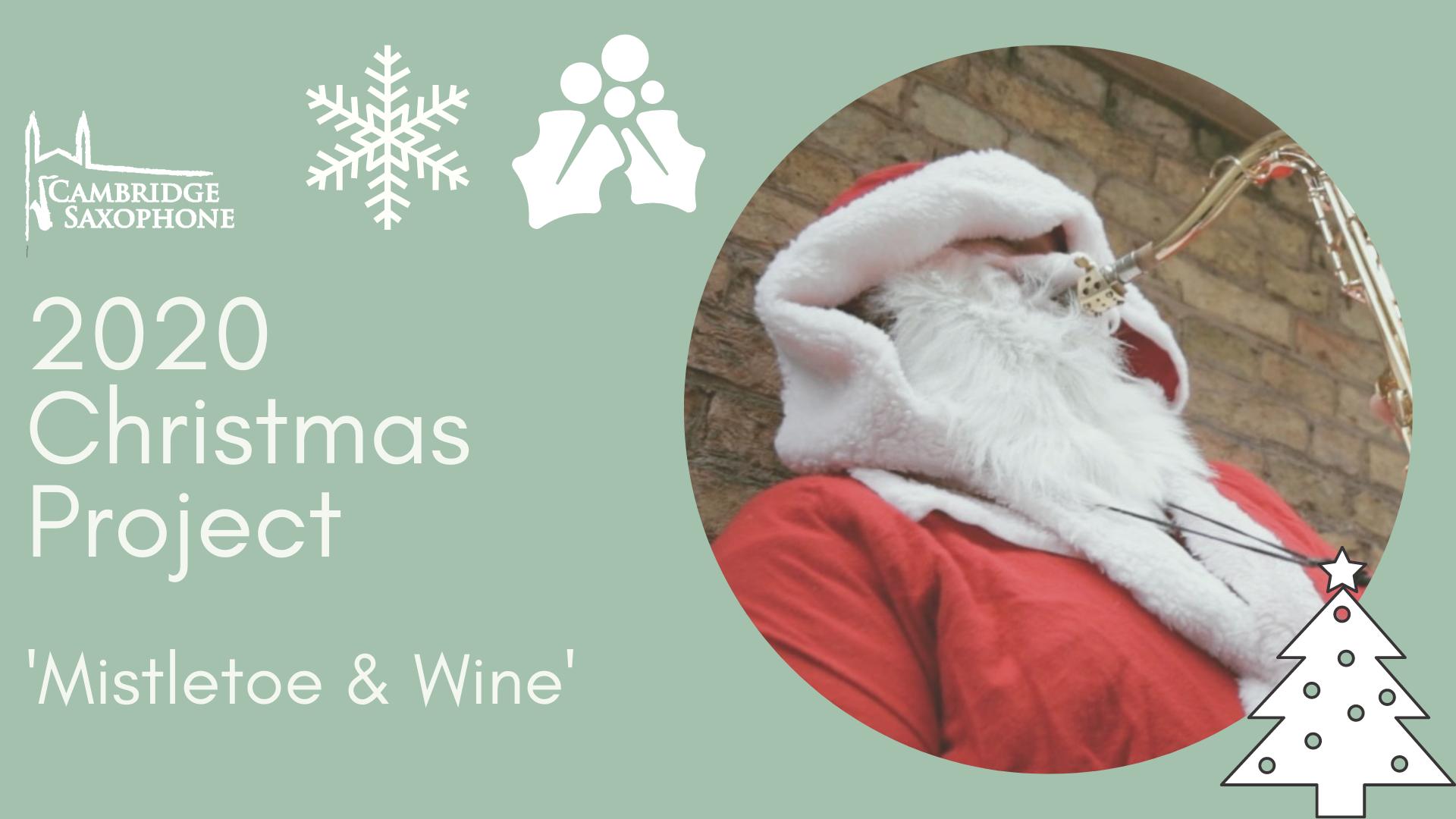 So here it is – in honour of the ‘Lockdown Christmas’ we have our 2020 Student’s Christmas Project. It was so thrilling to see all of you not only mastering the music but also the technology as this was the first year that everyone has sent in contributions from home. We’ve had contributions from the USA, Saudi Arabia, Vietnam, Thailand, Liverpool and even Royston!

Please do share and well done. Each year our Christmas project gives you a chance to measure your progress from last year. I’m already looking forward to hearing what you will have in Christmas 2021!

2020 is going to be a very different Christmas from what all of us have known before, but it doesn’t mean we shouldn’t get together and do our traditional students Christmas Project.

All our pieces are taken from this book

Sadly, this years can’t be found in the latest edition of the book so PLEASE DO GET THE BOOK, but download the files here

On your recoding you SHOULD PLAY WITH HEADPHONES so I can only hear you! 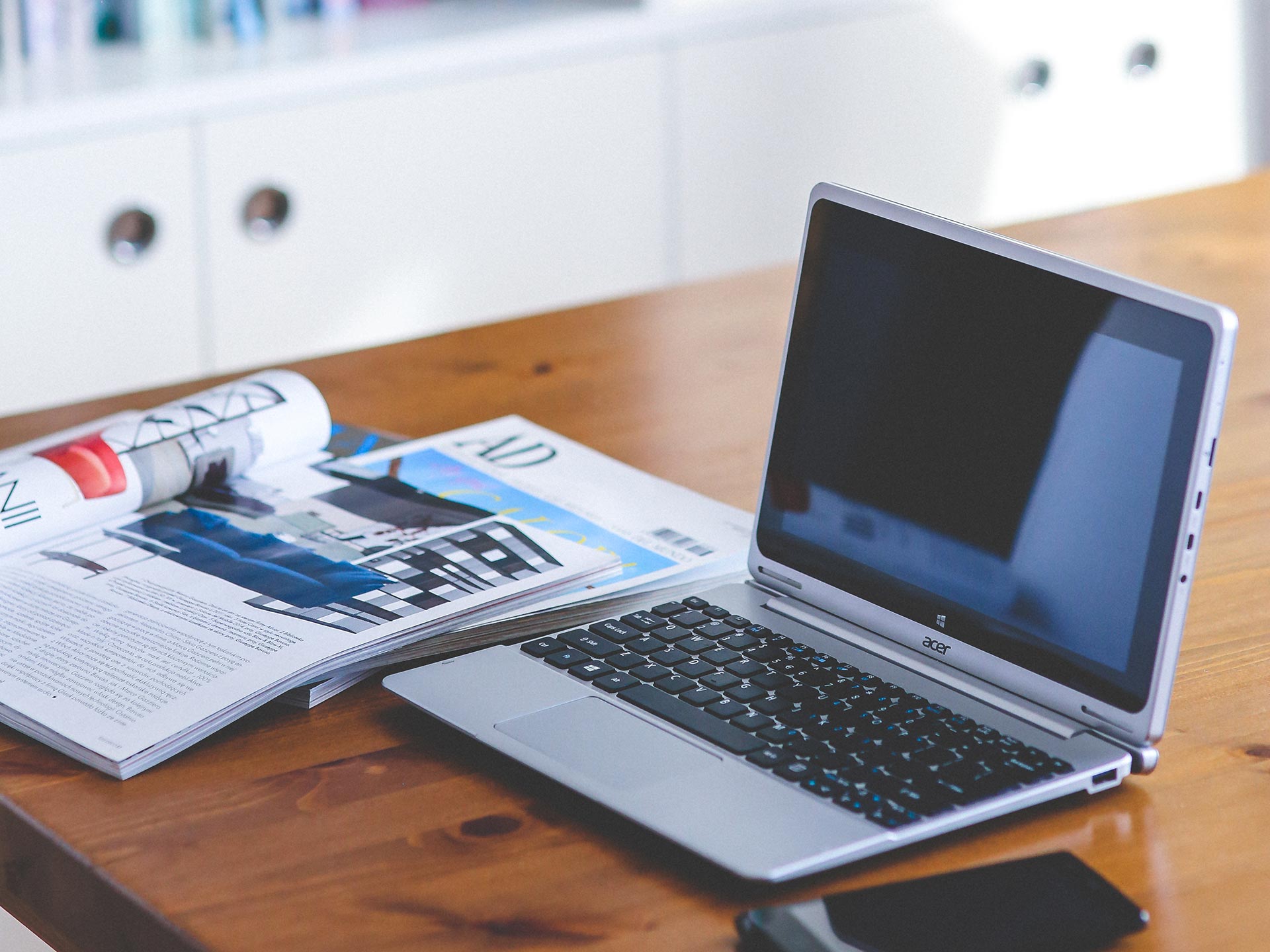 We have over 29 transcription projects now available on Cambridge Saxophone.com each one a carefully constructed course designed to help you improve your tone, time and vocabulary. 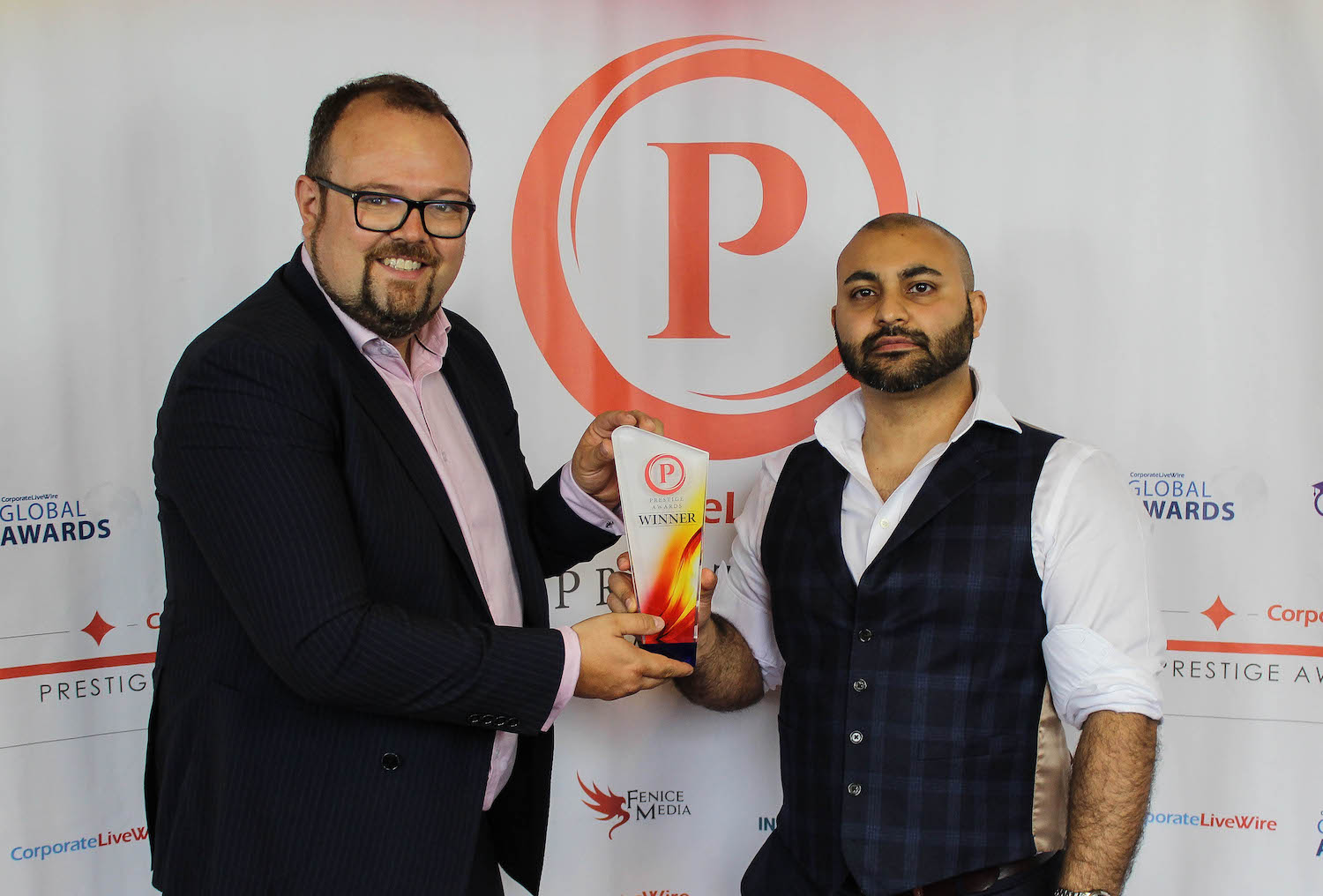 Music Teacher of the Year

I was delighted to receive the ‘Music Teacher of the Year’ award at Madingley Hall, Cambridge on Thursday, 27th August 2020. The judges cited the incredible testimonies from my students and the clear results in their exams and public performances as a clear indication of excellence.

The award is testament to the hard work of my students who motivate me too keep bringing innovative lessons to CambridgeSaxophone.com

Here’s to working hard for next year’s award! 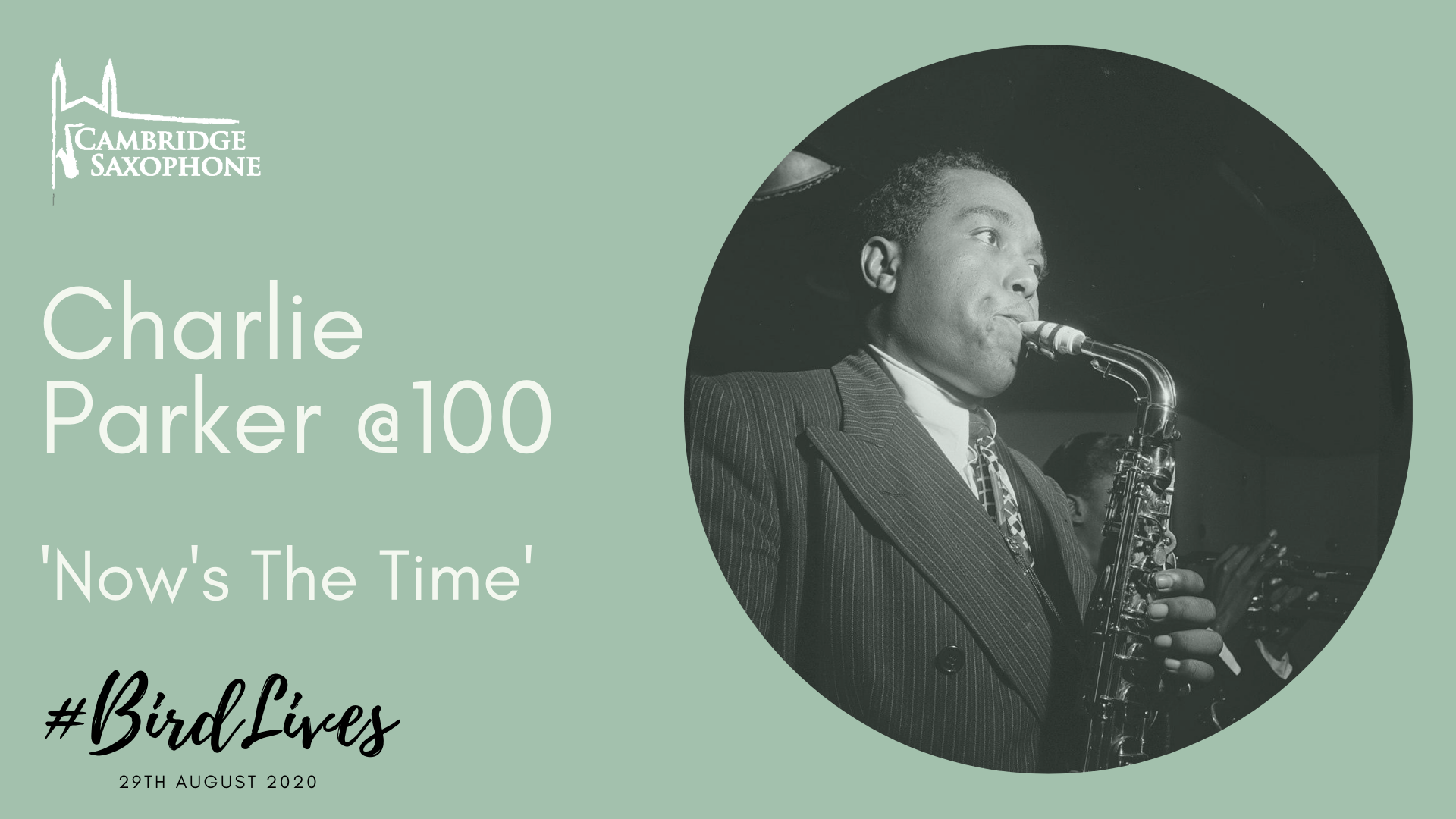 Saturday, 29th August 2020 marks the 100th Birthday of Charlie Parker. Parker, (nicknamed ‘Yardbird’ or simply ‘Bird’) is quite simply one of the most important saxophonists who has ever lived. His mastery of the instrument and the music has arguably never been surpassed and the influence he has had on every saxophonist, even every jazz musician that came after him is legendary.

Sadly, owing to Covid-19 I can’t be at his graveside with others this Saturday as I had originally planned. There’s various videos on YouTube of others doing this over the years, but it simply won’t be possible for me, or many others to play ‘Happy Birthday’ to Bird this Saturday.

Submit to [email protected] and I will publish the video at some point on Saturday – our little way of marking Bird’s 100th Birthday, even during these difficult times.

If you really want to get to grips with this then have a look at my Now’s The Time Transcription Project.