Tag Archives: How to play the sax 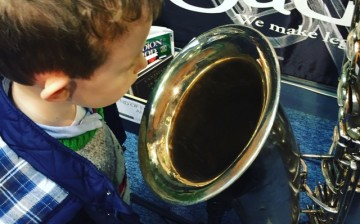 How to play the Saxophone..

This rather ‘tongue-in-cheek’ description about playing the saxophone has been floating around the internet for a while now, and as such I’m not totally sure of the original source…

As usual if you don’t get the sense of humour behind this, please don’t be offended!

First things first: If you’re a white guy, you’ll need a stupid hat, the more stupid the better and preferably a beret.

Sunglasses are optional, but all the really, really good players wear them, especially indoors.
You’ll also need some “gig shirts”-Hawaiians are good, but in a pinch anything with a loud floral pattern is acceptable, as are T-shirts from various jazz clubs and festivals. The good thing about the latter is that you can get them mail order so you don’t have to go to all the trouble of actually seeing and hearing live music. And sandals are an absolute must, even in winter.

Once you’ve assembled the proper attire you can begin practicing. One of the most important things about playing is being able to convey emotion to the audience. This you do through various facial expressions.

The two emotions you’ll need to convey are (1) rapture / ecstasy and (2) soul wrenching pain and sadness (i.e., the blues). You may find it useful in the beginning to borrow a page from the method acting school. So, for example, to convey rapture, try thinking of something nice-like puppy dogs or getting a rim job from Uma Thurman while Phil Barone feeds you Armour hot dogs with
truffle sauce.

To convey the “blues” try thinking of something really appalling-like ulcerative colitis or Alec Baldwin.

You should practice your facial expressions in front of a mirror at least two hours per day. You may feel a tad stupid at first, but you’ll never get the chicks if you don’t jump around on stage like a monkey-with your face screwed up like there’s a rabid wolverine devouring your pancreas. And, bottom line, getting chicks is really what music’s all about.

Next, you’ll need the correct ligature.

Some people think that the ligature is just a stupid old piece of metal that holds the reed on the mouthpiece. Well, those people are idiots. Besides your beret, the ligature is the single most important piece of musical equipment you will ever buy.
Mine, for example, is 40% platinum and 60% titanium; one screw is rubidium and the other plutonium. It makes me sound exactly like Booker Ervin would if Booker Ervin wasn’t (1) dead and/or (2) living on Mars.

You may have to spend years and years and thousands of dollars finding the proper ligature, but in the end it definitely will be worth it.
Now reeds. Optimally, you’ll want to move to Cuba, grow and cure your own cane, and carve your own reeds by hand. If you’re just a “weekend warrior” however, you can get by with store-bought.

First, buy ten boxes of reeds -100 in all. Next, open all the boxes and throw away 60 reeds.
Those were unplayable. Take the remaining reeds and soak them in a mixture of 27.8% rubbing alcohol and 72.2% pituitary gland extract for a period of 17 weeks.

Throw away 20 more reeds. Those were stuffy.

Take the remaining 20 reeds and sand each one for exactly 13 seconds with #1200 grade 3M sandpaper.

Throw away 14 reeds. Those squeaked.

Take the remaining 6 reeds and soak them for another 17 weeks, this time however in a mixture of 27.8% pituitary gland extract and 72.2% rubbing alcohol.
Sun dry the 6 remaining reeds for 3 weeks, optimally at an equatorial latitude, and throw away 3 more just on general principles.

You now have 3 reeds that will last you several months if you play each one only 20 minutes a day in strict rotation.
Now, you say you just bought a horn. Although you didn’t say what kind it is I’d sell it immediately and get a different one.

The following brands are good: Selmer Paris Mark VI. The following brands suck: any other Selmer, Yamaha, Conn, Beuscher, Yanigasawa, Cannonball, LA, Jupiter, Elkhart, King, Martin, Keilworth, Boosey and Hawkes, Couf, Silvertone, and Holton. On no
account should you play the horn before you buy it: go strictly on reputation and price.

You will also need some accoutrements: a flight case capable of withstanding atmospheric pressure of dP = – Dg dz where Dand g are, respectively, the density of air and the acceleration due to gravity at the altitude of the air layer and dz is a horizontal layer of air having unit surface area and infinitesimal thickness; a metronome; a tuner; a combination alto-tenor-baritone sax stand with pegs for an oboe, bass clarinet, flute, english horn and bassoon; Band in a Box; every Jamie Abersold play-along record ever created; a reed cutter; swabs, cleaners, pad savers, pad dope, pad clamps; a Sennheiser Digital 1092 Wireless Microphone; an effects rig with digital delay and parametric EQ; and a 200 watt (per channel, minimum) amplifier and 18″ monitor.
It will be helpful if you listen to lots of sax players. Unfortunately, listening solely to players you like is absolutely the worst thing you can do.

To really understand the music and its traditions you have to go back to the beginning and listen to every bit of music ever recorded. I’d start with madrigals and work forward. Once you get to the 20th century, pay particular attention to players like Jimmy Dorsey, Sidney Bechet, and Al Gallodoro who are the foundations of the modern jazz saxophone.

In no time at all, or by 2034-whichever comes first-you’ll be able to nderstand the unique be-bop stylings of players like Ace Cannon, Boots Randolph, and Sam Butera.

Finally, to play the sax itself, blow in the small end and move your fingers around.